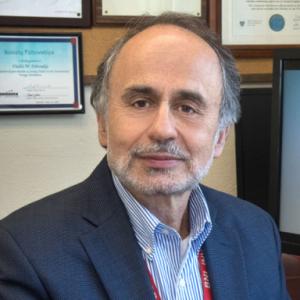 Vasilis Fthenakis is the Founding Director of the Center for Life Cycle Analysis (CLCA), and Adjunct Professor in the Department of Earth and Environmental Engineering and the Department of Electrical Engineering at Columbia University. Fthenakis is internationally recognized with his leading work in the energy-environment nexus and renewable energy grid integration. With a focus on developing methodologies, models, and tools to analyze cleaner energy alternatives, he has been a pioneer in studying the environmental impact, resource availability and recycling of photovoltaics (PVs), accelerating their commercial adoption around the world. His research on the life-cycles of renewable, nuclear, and fossil-fuel technologies has been a crucial contribution to today’s key debates about energy and climate change and has put several energy technologies on a comparable basis with solar. More recently, he broadened the CLCA’s research to explore solar-enabled water desalination and “green” hydrogen production.
Fthenakis has a BS in Chemistry from the National University of Athens, a MS in Chemical Engineering from Columbia University, and a PhD in Fluid Dynamics and Atmospheric Science from New York University. He joined Columbia University in 2006, in a joint appointment with Brookhaven National Laboratory (BNL) of the U.S. Department of Energy. At BNL in a distinguished 37-years career he reached the highest scientific rank of a Tenured Senior Scientist, and he remains a Distinguished Scientist Emeritus. At Columbia he founded the Center for Life Cycle Analysis (CLCA), with the objective to guide technology and energy policy decisions with holistic and well-balanced descriptions of the sustainability profiles of energy systems. Fthenakis is the author of three books and more than 400 scientific articles and reports, and serves on the Editorial Boards of several international journals. He is a Fellow of the American Institute of Chemical Engineers (AIChE), a Fellow of the Institute of Electrical and Electronic Engineers (IEEE) and a recipient of several honors and awards including the 2018 IEEE William Cherry Award “for his pioneering research at the interface of energy and the environment that catalyzed photovoltaic technology advancement and deployment world-wide” and the 2022 Karl Boer Solar Energy Medal of Merit for “distinguished contributions to quest for sustainable energy”.